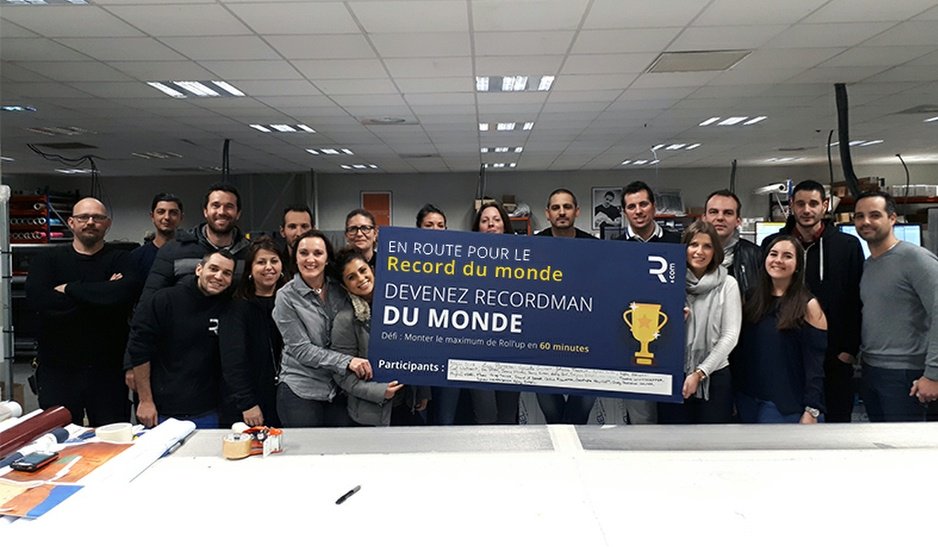 Innotech products were at the centre of a world record challenge when our customer Realisaprint.com set the world record for mounting the most roll-up graphics in 60 minutes, using the Origin Roller Banner.

The world record attempt started in January of this year when all 22 members of the Realisaprint team held heats to find the fastest amongst them, whittling down to the top four. The idea was not to just fix the graphic on the base, the participants had to take the roller banner out of the box, unroll the graphic, fit the roller banner professionally and then repack it back into its carry bag and box, taped and ready to be shipped complete.

Maxence, head of production, taught the participants the secrets of mounting a roll-up, keeping the tension just right and making sure the visual is correctly loaded. Several attempts later, with many mistakes and much laughter, all 22 competitors were ready to take up the challenge.

Four heats took place over three days between February 14th and 16th with the overall winners of each heat going on to a further final in March.

The team is ready for the first stage of this world record attempt. To qualify is simple: complete five roll-ups as quickly as possible (and obligatorily in less than 15 minutes).

At the end of these three intense qualifying days, many people managed to win their heat. However, the final was only accessible to the best four times of these qualifications and four of the team excelled themselves completing five roll-ups in the following times: Maxence in 8m 44s, Mark in 8m 54s, Sylvain in 9m 18s and Cédric in 9min 28s.

The four colleagues, all from Realisaprint production team, went on to the final held on March the 20th.

On this day, the four guys in the production team fought side by side: Maxence, Marc, Sylvain and Cédric. Their goal was simple: to install 15 roller banners as quickly as possible. It is under the encouragement worthy of an Olympic competition that these men faced each other. After gallons of sweat, meters of packing tape used and fifteen roll-ups mounted in the fastest time, Maxence won this final heat.

The final challenge rested on the shoulders of the Production Manager – Maxence. His final goal was to see how many Origin Roller Banners he could complete in 60 minutes. With courage and determination, Maxence or ‘Maximus’ as the team now calls him, managed an amazing 43 Roller Banners in one hour and claimed the World Record Title. He received his diploma in Paris on the 23rd of May.

Many congratulations to Maxence and the whole team for this amazing achievement!

About the Roller Banner used